The Magic of Yaacov Agam

Considered a father and pioneer of the kinetic art movement, Yaacov Agam is one of the most important living contemporary artists. He has been featured in museums around the world, including the Museum of Modern art in New York, the Tel Aviv Museum of Art and the Guggenheim.

Born in 1928 in Rishon LeZion, Agam is the son of a Rabbi who was a Kabbalist. This influence lives on through Agam’s nonrepresentational art, using symbolism and movement in his artwork. Agam works in various mediums, including painting, drawing, sculpture and lithography. 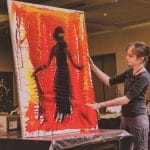